Update: On July 19th, 2017, we removed the legacy support edition of OmniFocus 2 from the App Store. Existing owners of the iPhone-only edition of the app can upgrade to the Universal edition at no cost by downloading OmniFocus 2 for iOS and checking for a discount in the In-App Purchases area. Learn more about upgrading here.

On April 2, 2015 we released the last of our universal updates to our iOS software lineup: OmniFocus 2.1 for iOS is a free update for OmniFocus for iPad 2.

Now that Apple has blurred the line between tablet and phone devices with the iPhone 6 Plus, it seems like the right time to combine the iPhone and iPad feature sets. With the universal release of OmniFocus 2.1 for iOS, you can now do the following things on an iPhone:

This release isn’t just about bringing iPad features to iPhone—we’ve also added a couple of items to both iPad and iPhone that were pretty popular with our TestFlight testers (thanks folks!):

OmniFocus universal contains a lot of smaller improvements and bug fixes, too.

To help illustrate the differences between the new universal app and the existing iPhone app, here’s a comparison table: 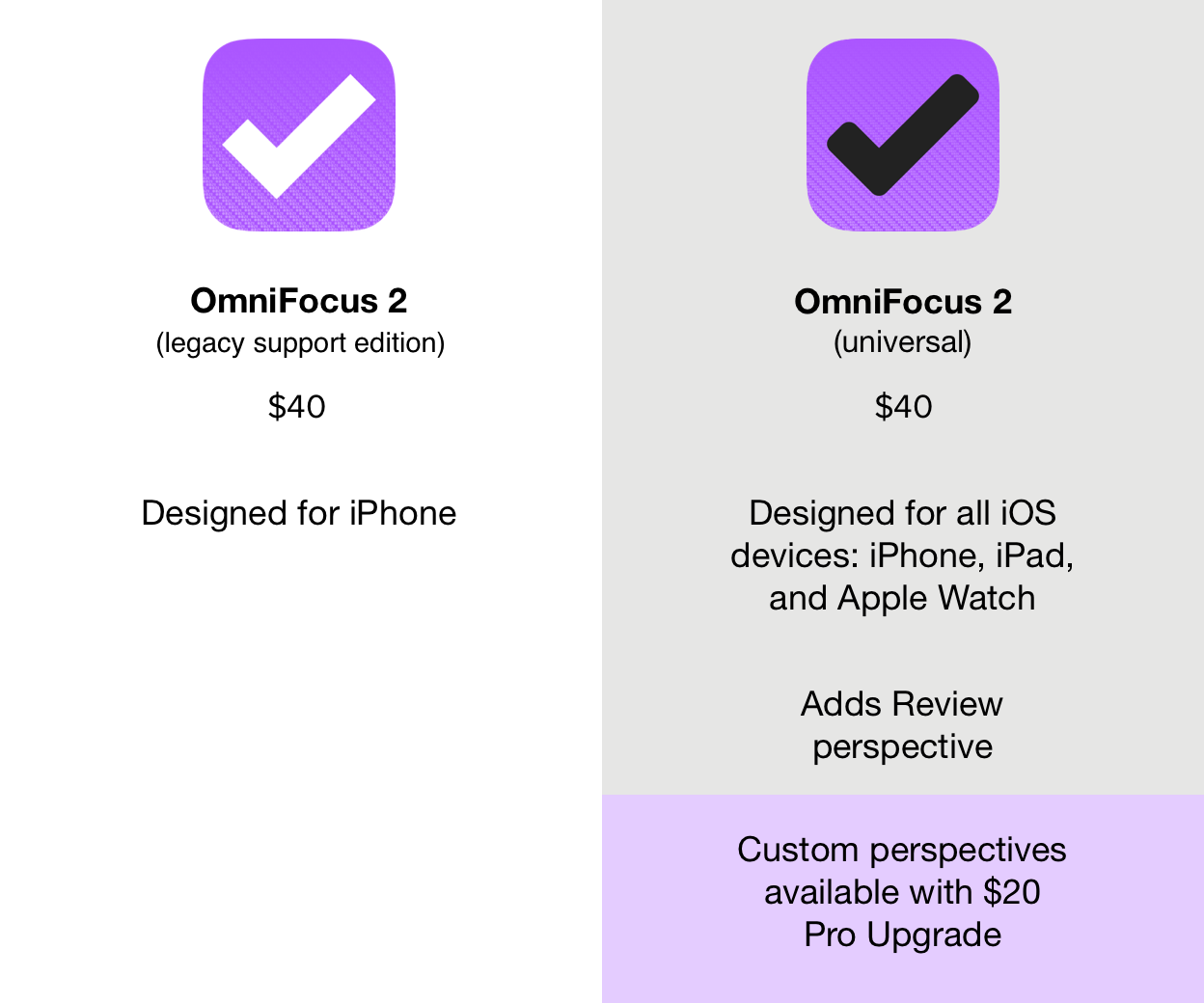 The iPhone-only app is now the same price as the universal version, in order to encourage new users to purchase OmniFocus 2 for iOS rather than the iPhone-only legacy support edition. OmniFocus 2 (legacy support edition) is still in the App Store so we can continue to offer updates to our existing customers, and so they can use Complete My Bundle to switch to the universal app without having to pay full price.

The App Store is more restrictive than we’d like in terms of discounts, but we’ve come up with several ways to reduce the cost of the app for those who’ve already purchased OmniFocus on iPhone (but as usual, we can’t do discounting that includes Mac editions of the app):

If you’re not sure you need to move from OmniFocus for iPhone yet, that’s okay; we’ll be continuing to update that app with new features and improvements alongside OmniFocus 2 for iOS, to make sure it stays current. The first such update was OmniFocus for iPhone 2.5, which brought Landscape Mode support. More major free updates are on the way, adding features such as Dark Mode, Swipe to Flag, and Push-Triggered Syncing.

We hope you’ll check out the new OmniFocus page on our site, watch the app preview video in the App Store or on Vimeo, and contact our support or sales teams with any questions.

I own both apps. Which should I install on my iPhone?

OmniFocus 2 for iOS (universal) offers an expanded feature set when compared to OmniFocus 2 (legacy support edition). If you own the universal app, you’ll most likely want to this version so that you have access to the widest variety of features.

I checked for updates, but it didn’t replace my iPhone app with the universal version. How do I get universal on my phone?

I installed OmniFocus 2 for iOS, but it didn’t overwrite the iPhone app. Do I need to keep both installed?

Since it’s a separate application, installing OmniFocus 2 for iOS won’t overwrite the existing app. However, once you’ve opened the universal app and set it up to sync with your existing data, you’re welcome to remove the iPhone-only app with a white checkmark from your device.

What if I want to leave both apps on my device? Will this cause a conflict?

It’s safe to leave both apps installed simultaneously, if you prefer! That said, it’ll probably be less confusing if you only have the one installed.

Does this mean you’re retiring OmniFocus 2 for iPhone? Will my app continue to be updated?

OmniFocus 2 for iPad has become a universal application, which means you’ll be able to install it on an iPhone going forward. That said, the iPhone version of OmniFocus 2 is still being updated with new features and improvements alongside the universal app. After releasing OmniFocus 2.1 for iOS (universal), we released our first update to OmniFocus 2 for iPhone, version 2.5, which introduced support for Landscape Mode.

I have an iPhone 6 Plus. Why aren’t I seeing a sidebar in Landscape Mode?

This is dependent upon your preferences in Settings.app > Display & Brightness > Display Zoom: View. If you’re using the Zoomed configuration, then your screen resolution mimics smaller devices, and the full iPad-like layout won’t be available in applications like OmniFocus and Mail. If your Display Zoom is set to Standard, the native resolution will allow for more content on the screen, including the sidebar layout in OmniFocus 2.

© 1994–2021 The Omni Group; Apple, MacBook, the Apple logo, iPad, and iPhone are trademarks of Apple Inc., registered in the U.S. and other countries. App Store is a service mark of Apple Inc.