iOS 11 removes support for apps released before 2013. Once you install this OS update, you will no longer be able to open or run 32-bit apps, including our earliest iOS releases from 2007 through 2013. Apple provides more information about these changes on their site:

Before updating to iOS 11, we recommend checking to see which installed apps aren’t compatible with iOS 11. Open Settings.app, then tap General > About > Applications to see a list of incompatible apps. If you decide not to upgrade, or if a newer version is unavailable, you must leave iOS 10 installed to maintain access to the app.

On iOS 10, apps affected by this OS change will show the following “Needs to Be Updated” error message when opened: 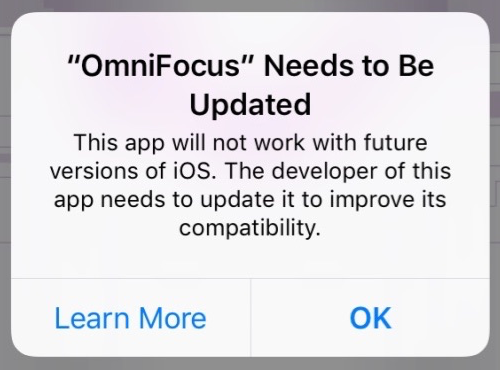 After updating to iOS 11, these apps will no longer open when tapped, and will display this error: 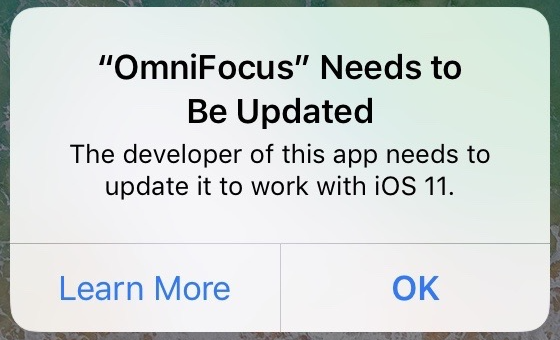 To be clear, nothing about the apps has changed. As of iOS 11, the operating system longer includes the code that opens and runs 32-bit apps.

Upgrading From a v1 App

If you’re interested in upgrading from a v1 app to the most recent version of the iOS application, you may be eligible for a discounted upgrade. We’ve released minimally-functionality updates to our v1 apps so that they can be installed on a device that is running iOS 11, and this update will need to be installed alongside the most recent version of the app in order to take advantage of our discounted upgrade pricing. Information about reinstalling or updating the v1 app you own is available here.

Detailed information about purchasing a discounted upgrade in each of our iOS applications is available in the following app-specific articles:

© 1994–2021 The Omni Group; Apple, MacBook, the Apple logo, iPad, and iPhone are trademarks of Apple Inc., registered in the U.S. and other countries. App Store is a service mark of Apple Inc.