OmniGraffle 3 for iOS is a free download in the App Store, with the Standard or Pro feature sets available via an In-App Purchase. We also offer a 14-day free trial, which you can learn more about here.

Start by downloading and installing OmniGraffle 3. This article walks you through the different purchasing options available for new and upgrading users.

In OmniGraffle 3, tap the

Settings gear icon in the toolbar atop the Document Browser. Tap

In-App Purchases to bring up the Unlock OmniGraffle window, which lists the available feature sets as well as their prices.

When you first open OmniGraffle 3, the app will start in Free Viewer mode. Want to try out OmniGraffle 3 before buying? From the In-App Purchases window you can choose when to start your 14-day free trial, during which time you can try the complete feature sets of Standard and Pro. You can use the In-App Purchases window at any point to remove the time limit and fully unlock the Standard or Pro feature set. Tap the Learn More links under each feature set to see an overview of the features included in either feature set.

When you’re ready to purchase OmniGraffle 3, tap Unlock Standard or Unlock Pro in the In-App Purchases window, then tap Buy Now and confirm with your Apple ID to complete your purchase.

You’ll receive a confirmation prompt letting you know the purchase was successful. If you have any other devices to install OmniGraffle 3 on, use the Restore Purchase button in the In-App Purchases window on your other device to activate the same feature set elsewhere. Thanks for purchasing OmniGraffle 3—you’re now ready to get to work!

Thanks for being an existing customer! If you’ve purchased an earlier version of OmniGraffle, you may be eligible for a discount when upgrading to either feature set of OmniGraffle 3. As part of the validation process, OmniGraffle 3 and the previous version will both need to be installed simultaneously on the same device.

Note: If you purchased both OmniGraffle 1 for iPad and OmniGraffle 2 for iOS, you only need to (re)install one of the apps. 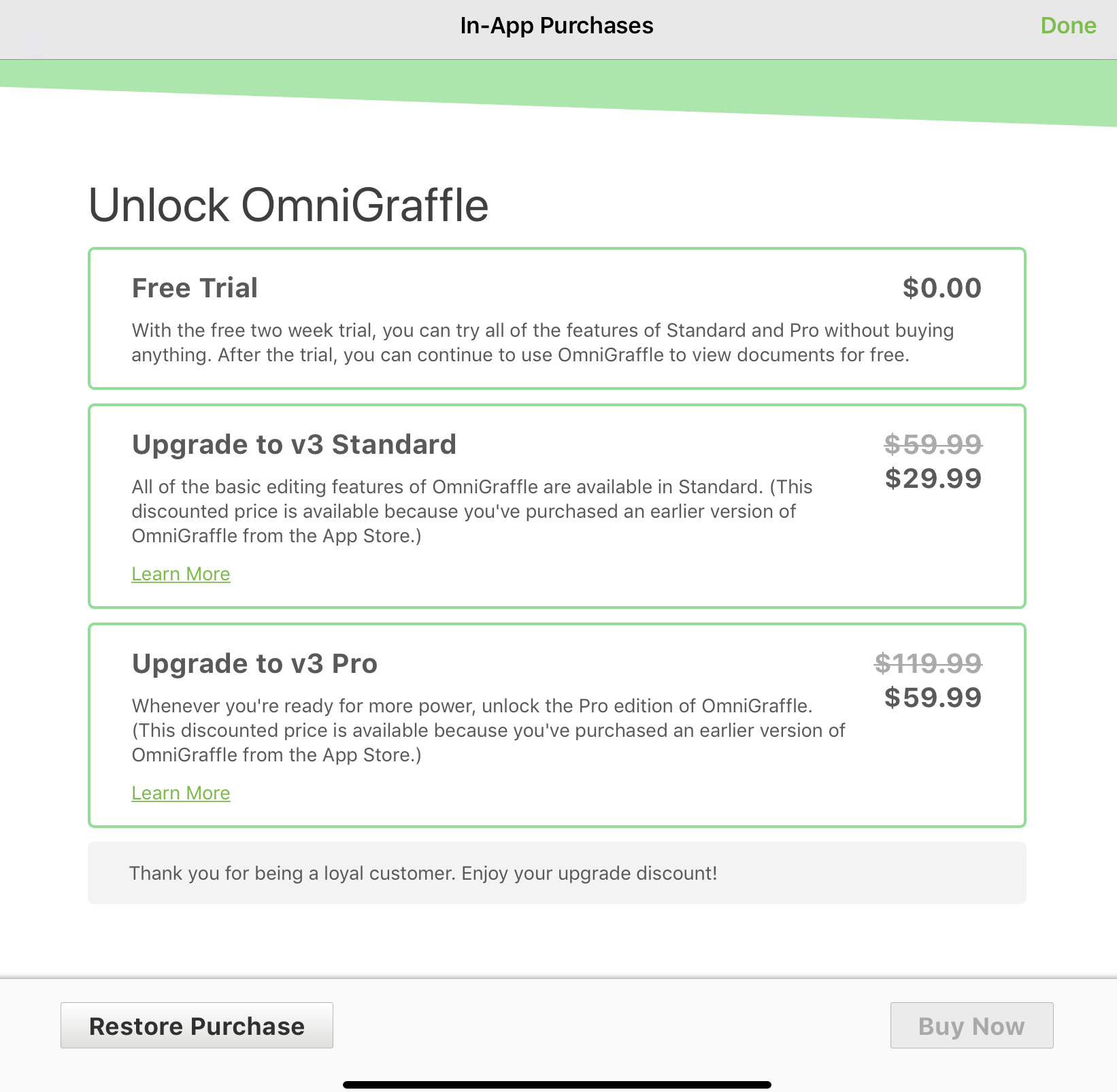 You’ll receive a confirmation prompt letting you know the purchase was successful. If you have any other devices to install OmniGraffle 3 on, use the Restore Purchase button in the In-App Purchases window on your other device to activate the same feature set elsewhere. Thanks for purchasing OmniGraffle 3, and for your continued support!

Activating (or reactivating) features on another device

After the initial In-App Purchase is completed, that purchase is permanently associated with your Apple ID. As long as you are using the same Apple ID and are in the same country as the original purchase, Apple allows you to re-download any of your previous purchases for free.

If you’d like to activate Standard or Pro on any of your other iOS devices, or if you’ve performed an iOS restore and have wiped everything off your device, then head back to this In-App Purchases window and tap the Restore Purchase button. This reactivates your previous In-App Purchase, so you don’t need to purchase everything all over again.

This validation process for an upgrade discount requires you to have an earlier version of OmniGraffle installed. That’s great news if you’ve still got the app on your device, but what if you’ve removed it already?

If we don’t detect the previous version of the app, when you tap the Check for Discount button you’ll be asked to re-download it from the App Store.

Any time you make a purchase in the App Store, that purchase is tied to your Apple ID. As long as you are using the same Apple ID and are in the same country as the original purchase, Apple allows you to re-download any apps you’ve previously paid for, free of charge.

If you’ve reinstalled OmniGraffle 2, open that version of the app at least once. After the previous version is reinstalled, proceed with the remaining steps in the Upgrade Pricing for existing customers section. When successful, we’ll tell you that you’re eligible and you can then tap the discounted upgrade options to proceed with your purchase.

If you are unable to reinstall the previous version, try logging out and logging back in to the App Store.

Do I need to keep both versions installed?

Once you’ve finished purchasing OmniGraffle 3, and have moved over all your existing data and documents, it’s safe to uninstall the earlier version. It’s also totally OK to leave both apps installed simultaneously if you prefer. However, we expect most users to remove the earlier version after setting up OmniGraffle 3, as it might make things a little more confusing since it’s hard to tell the versions apart by icon alone.

If you do decide to uninstall the earlier version, make sure your data’s all loaded into OmniGraffle 3 before deleting OmniGraffle 1 or 2!